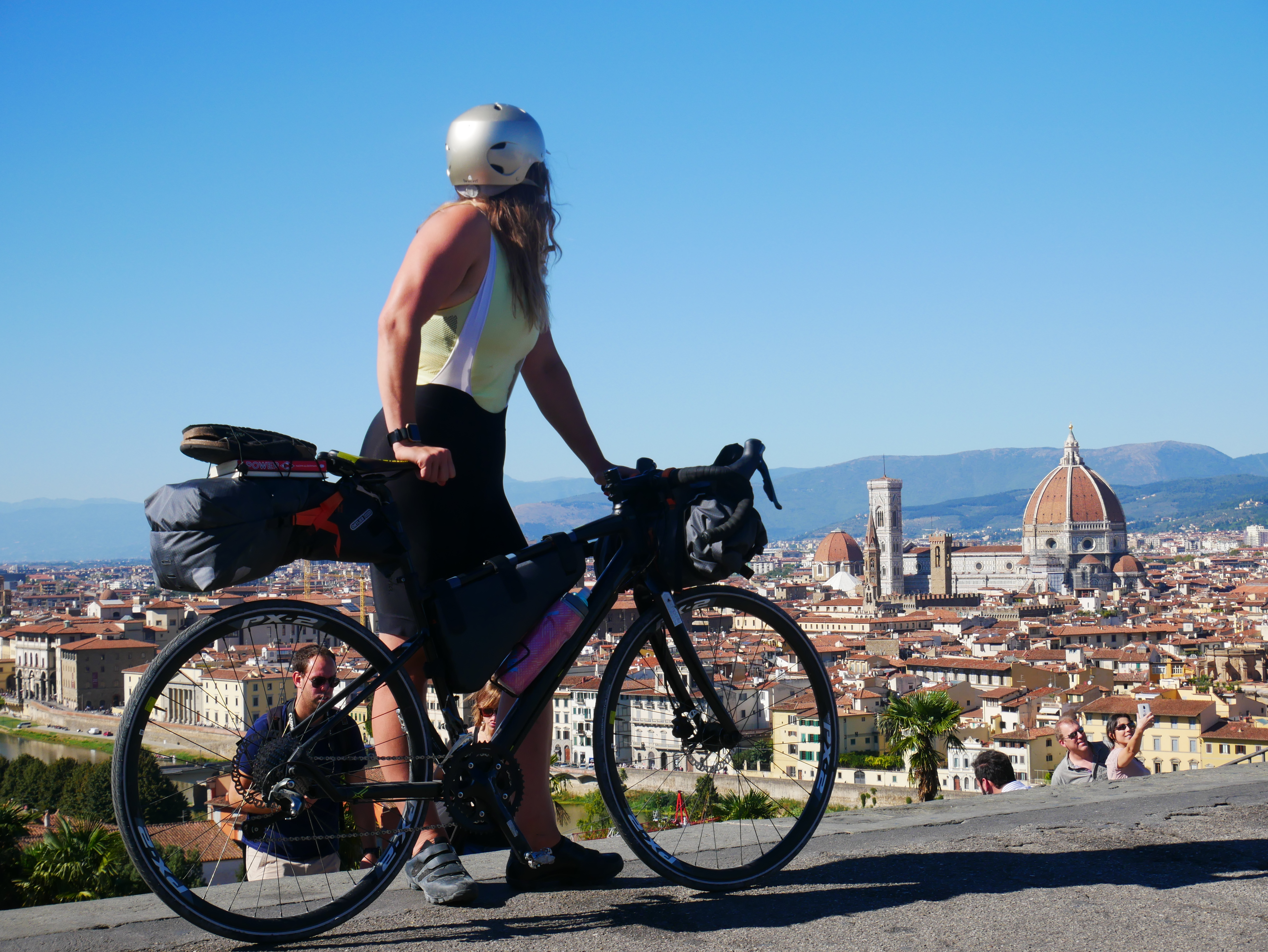 The final stretch of our cycling in Tuscany involved a final stint uphill to Florence.

The Komoot route deemed this as expert to give you an idea of literally ending on a high.

After packing our bags for the penultimate time, I was a little sad that our cycling tour was over, bar a final ride from Pisa train station to the bike shop about 13km outside of the city the following day.

What seemed to be the hottest day of the trip, the slightly longer ride with some steep twists and turns towards the end was very much an uphill struggle.

Initially we stopped in Radda for breakfast as it’s meant to be a tourist destination, however it was a bit average. Plus, there wasn’t much by way of dairy free options for me (probably one of the main reasons I don’t remember it fondly).

We stopped in Greve for lunch and coffee. With a delicious restaurant, cafe or deli on every side, this town was the perfect final stop before ending in the tourist heaving streets of Florence.

After a fair few twists and turns, ups and downs, we ended up in the outskirts of Florence.

Before heading down to the hotel, we stopped at Plaza Michaelangelo as this gave the best view across the whole of the city. That said, we cycled and resorted to walking up, the world’s steepest climb before this point which gave an even better view.

Florence is SO EXPENSIVE (understatement of the year) so after initially sitting in a cafe on a main square, about to order 2 espresso martinis for 20€ each, we wandered on and stumbled across Il Vinile. Aptly named for the vinyl lining the walls and tables. Here espresso martinis were much cheaper, expertly made thanks to it being a coffee shop, and they also served up a host of beers, wines and more cocktails. We were here early doors, however apparently this place is heaving in peak hours.

A fairly recent opening, Osteria dell’Enoteca was recommended to my best friend who we met up with.

Luckily we booked as there wasn’t an empty seat in the house, and it’s obvious why once you try the food and experience the service. Initially taken to the wine cellar (which was a glass wall wine fridge) and talked through the wine and matched with one to suit our budget and taste.

Bang in the centre and not the biggest rip off. They also had a courtyard to store our bikes which was a god send.

In addition, there was a secret roof terrace that overlooked Florence, probably the best view you could get as a tourist!

A little outdated and random despite a super grand entrance but hey, it was a bed for the night and that’s all we needed.

After exploring the sights of Florence, the last day involved a train to Pisa station, plus more troubles trying to buy a ticket for the bikes…

At the other end, we had a 13km ride to the final stop of the bike shop. Being a Sunday, taxis were hard to get hold of so make sure you book ahead of time. Luckily the owner was the kindest man and he rescued us by taking us to the airport.

The hotel served up the biggest spread, all included. Although we didn’t have a huge ride ahead, we may have eaten as if we had a long day ahead…

On the street leading up to the Leaning Tower of Pisa. Far enough away to not be a rip off, plus it looked decent enough to serve food that wasn’t the Italian equivalent of an Angus Steakhouse.

And just like that it was time to head back to ol’ Blighty.

Let me know if you end up doing the route, and how you found those supposedly glorious white Tuscan roads! 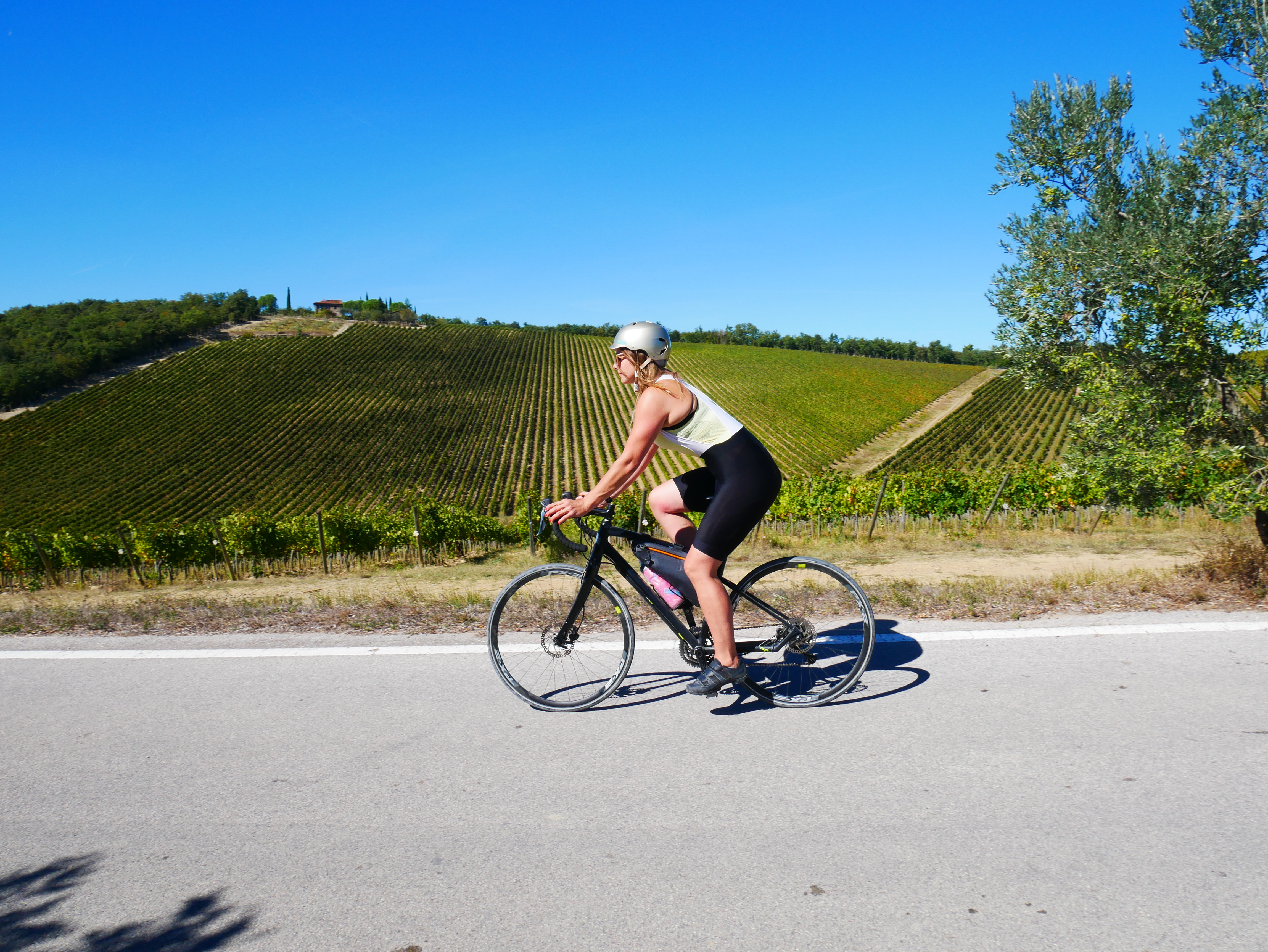