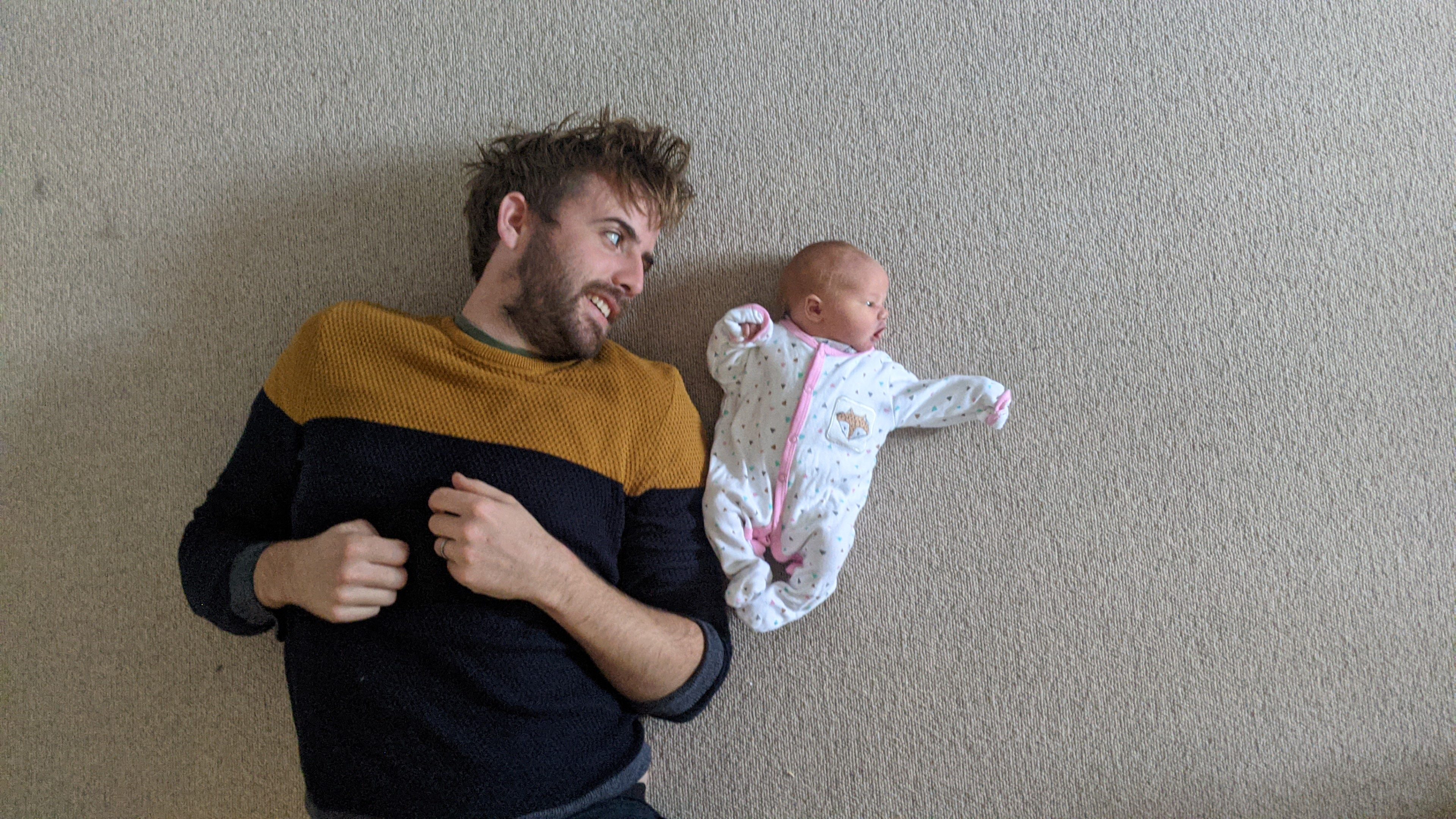 My Birth from Charlie’s Perspective 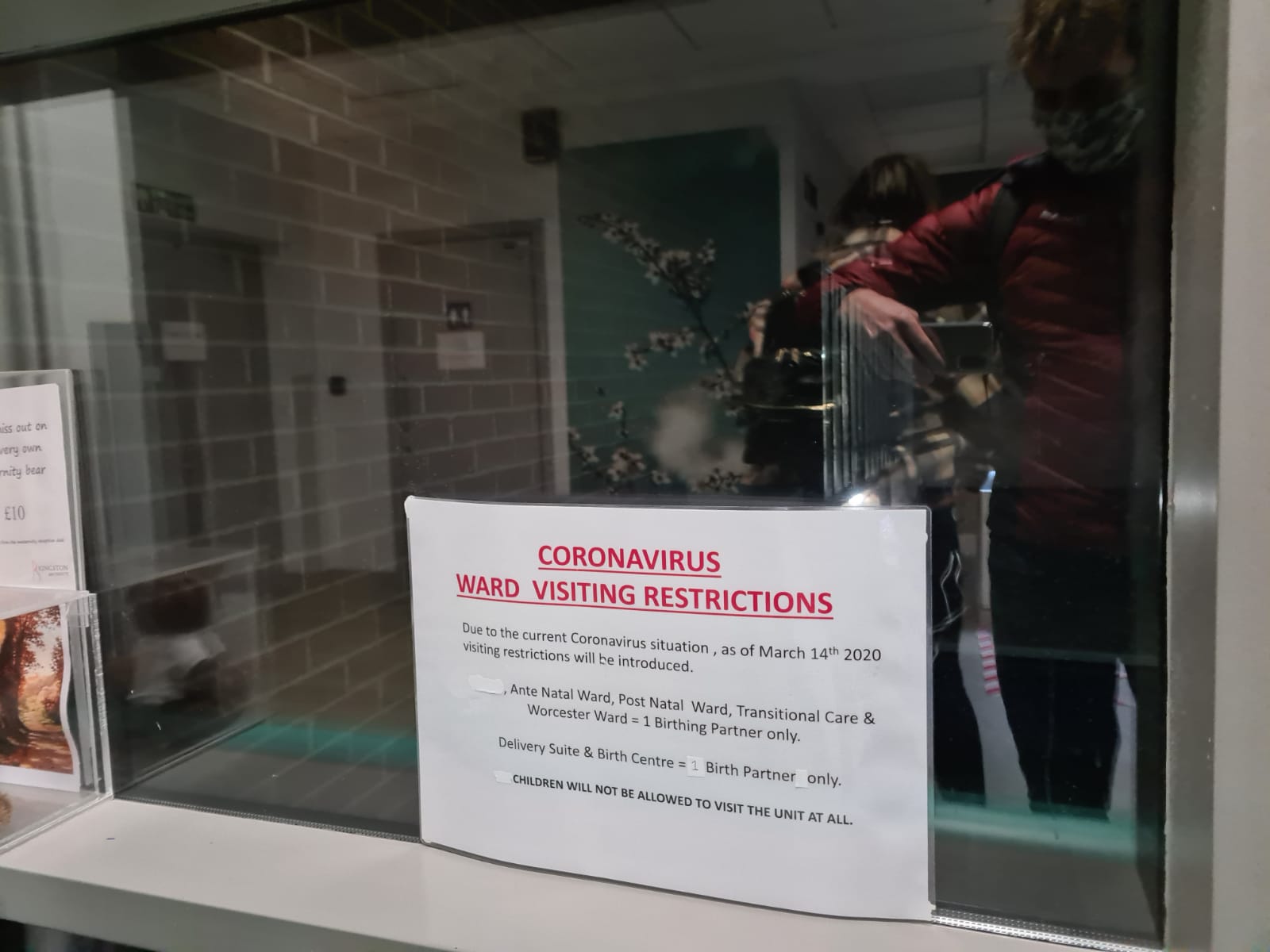 Like buying a house, filing a tax return and other adult stuff, pregnancy and birth is not very well catered for by the national curriculum. Particularly for the half of the population who don’t have to do it. As such, 9 months ago I had absolutely no idea what to expect other than a small screaming human who everyone says will be the greatest thing to ever happen to you.

Some of our friends have had babies in the last year or two. The bumps used to freak me out, but in two minute doses, the babies were all quite cute and lovely before handing them back to someone who knew how to stop them crying or change their nappy.

Most of the people I knew who had given birth seemed to be quite short on positivity. Lots of emergency C-sections, blood loss, inductions, tearing and other unpleasant sounding side effects. All of these ended with happy, healthy babies, but the process didn’t sound quite as straightforward as one might hope. Part of me thought this might be similar to how nobody ever leaves a good review voluntarily on tripadvisor, people only speak out when something’s gone wrong, maybe? Or is it just that we’re told to focus only on positive vibes for 9 months to ward off any chance of something negative creeping into the process?

When we were consuming the hypnobirthing course, an over the top level of calm, chilled advice about breathing, relaxation and the perfect birth experience, I couldn’t help but feel all this advice was a little bit like Mike Tyson’s quote “Everyone has a plan until they get punched in the mouth”. I can’t pretend I didn’t find the mega-zen lady who presents the course excruciating to watch, but if it helped Emily it was all good with me. A little bit like a religion. The god bit is nonsense but if the framework constructed around it gives the followers something to believe in, then it’s not hurting anyone. She tells you not to use the word ‘contraction’, rather that we should call them ‘surges’, because who needs morphine when you’ve got a fucking synonym.

After 9 months of actively and passively absorbing advice and knowledge about the birth process, all the while I think slightly in denial about what was looming, on Thursday 26th, it kicked into gear for real as some stomach and back pain became more regularly recurring early contractions.

Was this game time? Probably, but without any signs of immediate panic, we watched Four Weddings and a Funeral and went to bed. It felt like a normal Thursday night, but with more Hugh Grant, because he’s good for oxytocin. With contractions needing to be 2-3 minutes apart before you’re even allowed to contact the hospital, and Emily’s pain levels being somewhere around the mild to severe hangover levels, we went to bed.

At 2am she whacked me on the arm. They had become more regular and more painful. A bit like when you have a 3am alarm to get to the airport to go on holiday, the body is pretty good at kicking into gear at this time of day when having a baby is on the cards.

After telling us to go to sleep at 10pm, when I called Triage at 2am, they were happy for us to come in, only to duly send us home again at 5am after a few checks, and come back at 7am when they thought Emily would be ‘ready’. Seemed a bit high risk but had faith in their vastly superior knowledge and off we went back down the A3. If it was 3 hours later I’d have been a bit more worried about being stuck in traffic and being one of those people you read about on Mail Online who delivered a baby in their car and called their first daughter Volkswagen.

We got home, I wandered around a bit. Emily was fine for 2 out of every 3 minutes, before becoming completely incapacitated by the contraction and at one point being sick all over the floor. The cats were confused which was amusing for both of us. I fired up the Tens machine and wired it to Emily’s back which instantly helped with the pain. I tested it out on my quads a week before, I don’t recommend cranking it up to the max to see how it feels but it is worth knowing how to turn it on at least. She was happy with it on level 1/20. As hypnobirthing told me to, I rubbed her shoulders and lower back. She said this helped. I felt a bit like I was pushing water upstream with a fork.

In this scenario a part of you wishes  you could share some of the pain, but the reality is you can’t and there’s not a lot you can do about that. But there is plenty you can do, simple things like keeping the water bottle (get one with a straw) close at hand, and starting the car up so it was warm and defrosted when we needed to leave felt like they might have been of at least minor assistance.

Sophie, the midwife from Triage, told us the baby would be coming today when she sent us home at 5am, but we weren’t 100% sure if this would be the case, certainly that it would be that morning. Labour lasts ages, doesn’t it? Everyone seems to be in labour for at least 4 days from what I’ve heard.

We made it back to the hospital at 7am, with Emily stopping 3 times between the car and the Maternity reception, bent double and unable to move with the pain of contractions. We waited in reception for around 10 minutes. Emily screaming the place down whilst hospital staff calmly walked around having seen the same thing a million times before. The couple sat calmly next to us who were booked in for a planned C-Section were probably delighted with their choice.

Because of Covid, we’d not seen any of the maternity ward beyond Triage. I really didn’t know what to expect. I knew there were labour wards, private rooms, recovery rooms and some pools. How many of each there were, I didn’t know, nor if we’d be in a private room or in a ward with 25 other women all screaming and pushing simultaneously. Do you get your own midwife or do they do rounds like doctors on a ward?

The good news was, due to how well Emily’s very clever cervix was progressing, we were in perfect shape for a water birth, which is what she wanted. They turned on the taps and invited us in. It was like a suite in a 5* hotel. Enormous room. Big bed in the corner, fancy fairy lights adorning the walls, en-suite bathroom, and a giant jacuzzi in the corner, which was in fact the birthing pool. Nice one, NHS. We also had not one but two midwives with us the whole time. Bonnie, who was expertly directing proceedings with amazing calmness, positivity and energy and her sidekick, Lucy, who I think was in the final year of her midwifery degree.

After another 45 minutes of what appeared to be excruciating pain in 60s bursts every 2 minutes, eased by copious amounts of hippy crack on demand, the pool was ready.

She hopped in and instantly seemed happier. A kind of game-face appeared and she seemed ready for business. I could tell throughout the previous few hours that the advice about breathing which hypnobirthing drill into you, in for 4, out for 8, was always top of mind, and she kept this up right throughout.

I sat up at the head end pointlessly kind of tickling/stroking her shoulder which she said really helped, but I’m not convinced. I also made an absolute hash of trying to tie her hair up. Thank god for midwives.

Time isn’t really something you have much concept of at this stage. What felt like quite soon after getting into the pool, Bonnie got her angled mirror out and peered into the danger zone and declared that things were looking great and she could see the top of the baby’s head. I assumed this was merely positive chat to make everyone feel better, whilst knowing that we’d still be here for another 17 hours. 5 minutes later she invited me to take a look. “Look, there’s the head, can you see it”. Nope. I nodded but everything looked normal to me and to my untrained eye there was no sign of a new daughter any time soon.

A bit more screaming, pushing and positivity passed and Bonnie wheeled a trolley into the room called the ‘delivery kit’ or something like that. Soon after this, a second senior midwife appeared which is standard for birth, apparently.

I asked Emily if she wanted me to get any photos, and she said yes, so I was phone in one hand, shoulder stroking with the other for a couple of minutes. I’d recommend this. Might not be something you want to blow up and frame in the kitchen, but they’re pretty incredible life moments which you aren’t too busy remembering at the time. They can also be really funny.

She’d been in the pool for an hour or so, with what I still assumed would be hours and hours to go. Bonnie then issued a further instruction to push. So she did. And she kept pushing, screamed a bit more and then silence descended.

I looked down and it looked like there was one of those blue bricks you have to fish off the bottom of swimming pools when you are 8 years old, sitting on the floor of the 5* jacuzzi.

Well aren’t you going to pick her up then? Said Bonnie.

Emily reached down and pulled out a perfect, screaming, crying baby at 9.18am.

I started crying, she was crying, the baby was crying.

How good is this!?

A minute or two later I was entrusted with some scissors and pointed how to cut the cord before being told to take my top off and sit down. Bonnie brought Olive over to me where she promptly emptied her bladder all over me before falling asleep. We sat there for an hour or so, happily soaked in newborn urine whilst Emily delivered the placenta and had various people stare intently at her birthing apparatus before generally nodding in approval and giving her some stitches, fortunately not too many.

And that was that. Emily was happily relaxing, giving Olive her first feed at the same time. I’d stopped caring about my piss-soaked trousers and the midwives had left us to enjoy some chill time in the 5* suite.

That wasn’t so bad after all.

In one of the TV people-giving-birth programmes, I seem to recall them saying that 95% of births are straightforward, which seemed to contrast with our friend’s experiences. We’ll never know if we got lucky, if our experience was more normal than we thought or if all the preparation that Emily did with things like her Epi-no, pelvic floor exercises and general awareness of prenatal fitness is what made the difference. Either way we were incredibly fortunate to have such a complication free and relatively fast birth. I keep being told off for saying she made it look easy. It definitely wasn’t, but it could certainly have been longer, and more complicated.

It was also way less traumatic than I was expecting. Olive appeared, clean as a whistle, no blood, none of that white stuff which babies often seem to have on them. Not sure on the technicalities or reasons, but I wasn’t complaining. 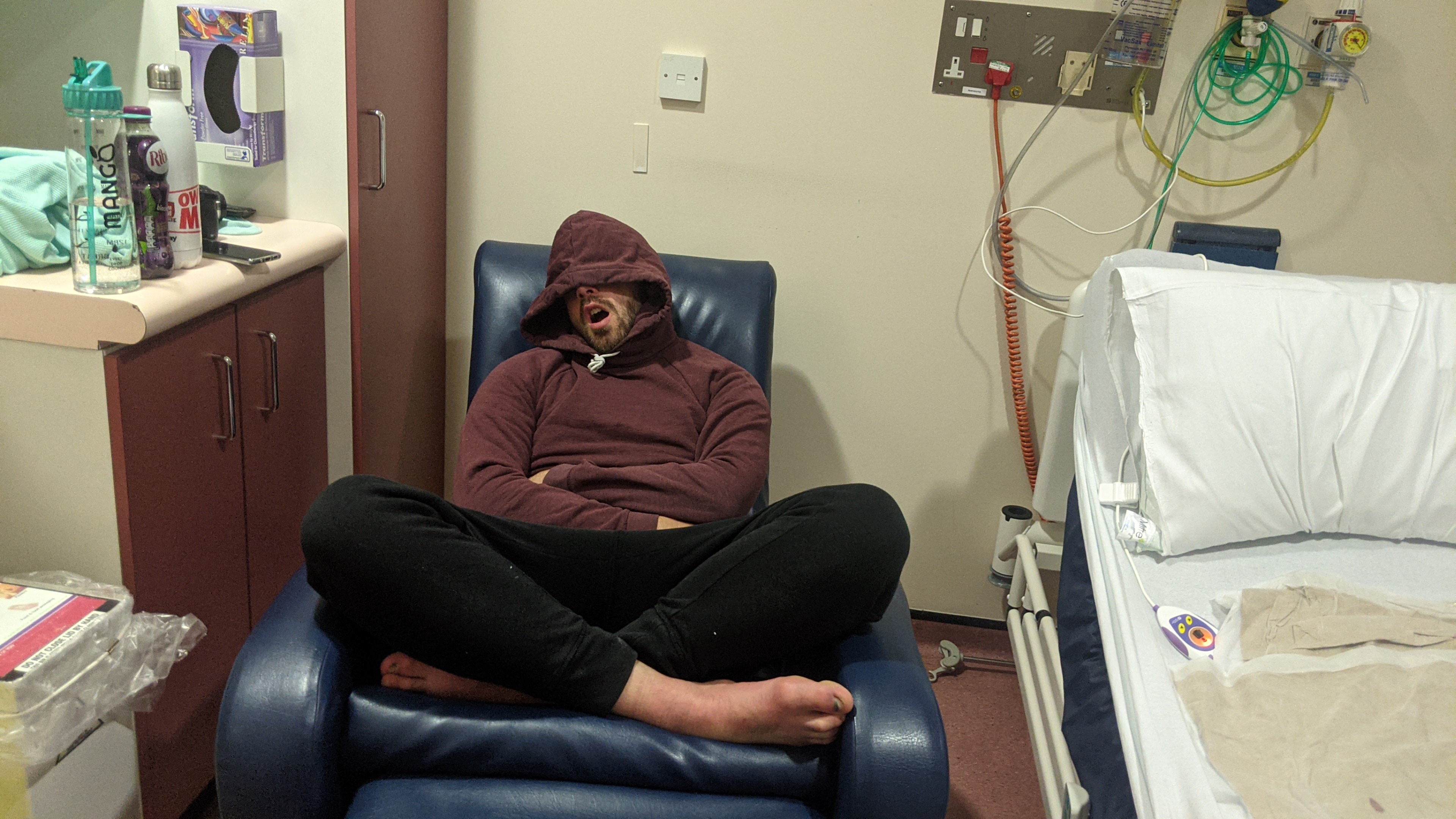 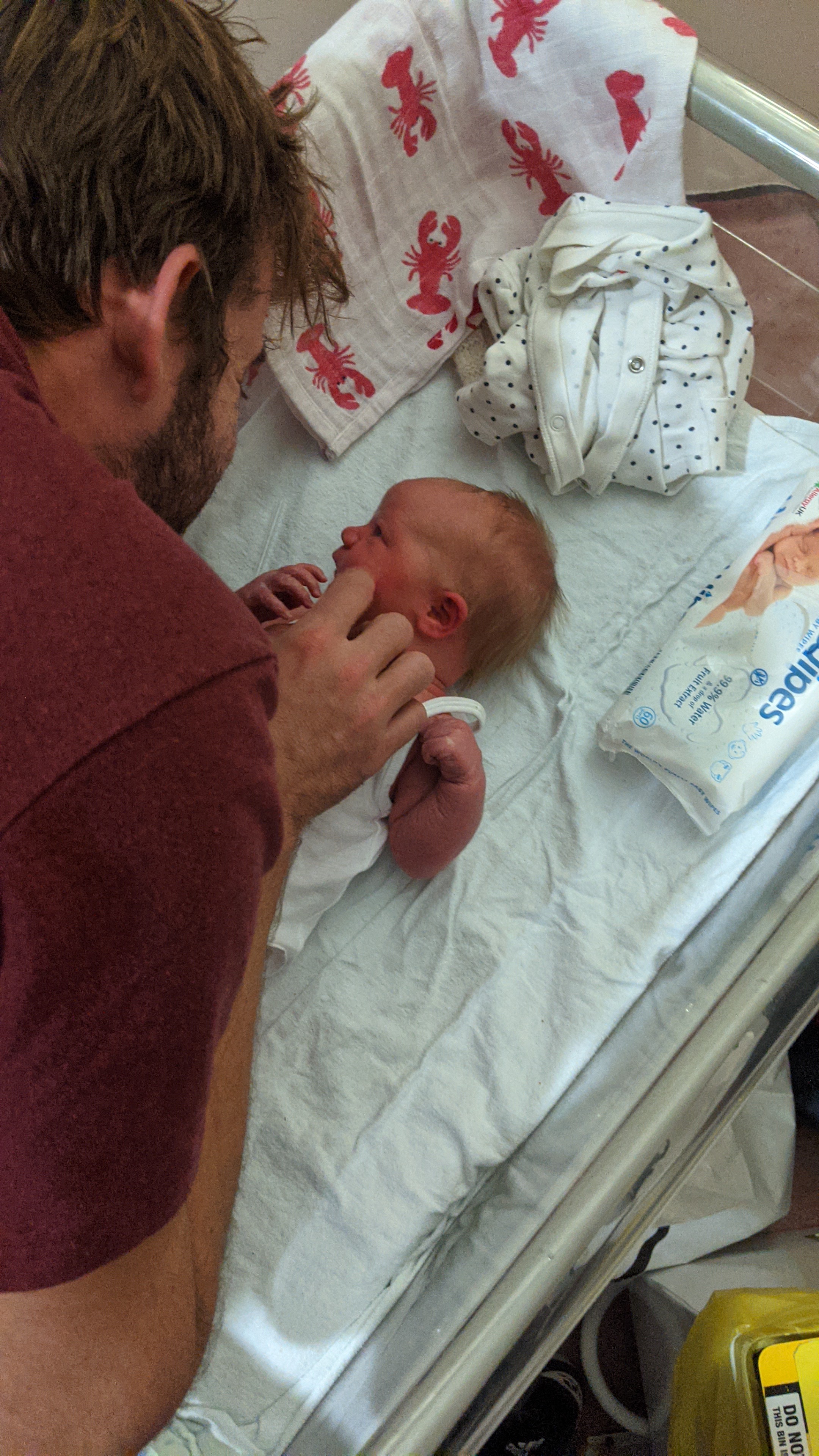 My words of advice to any dads to be are the following: 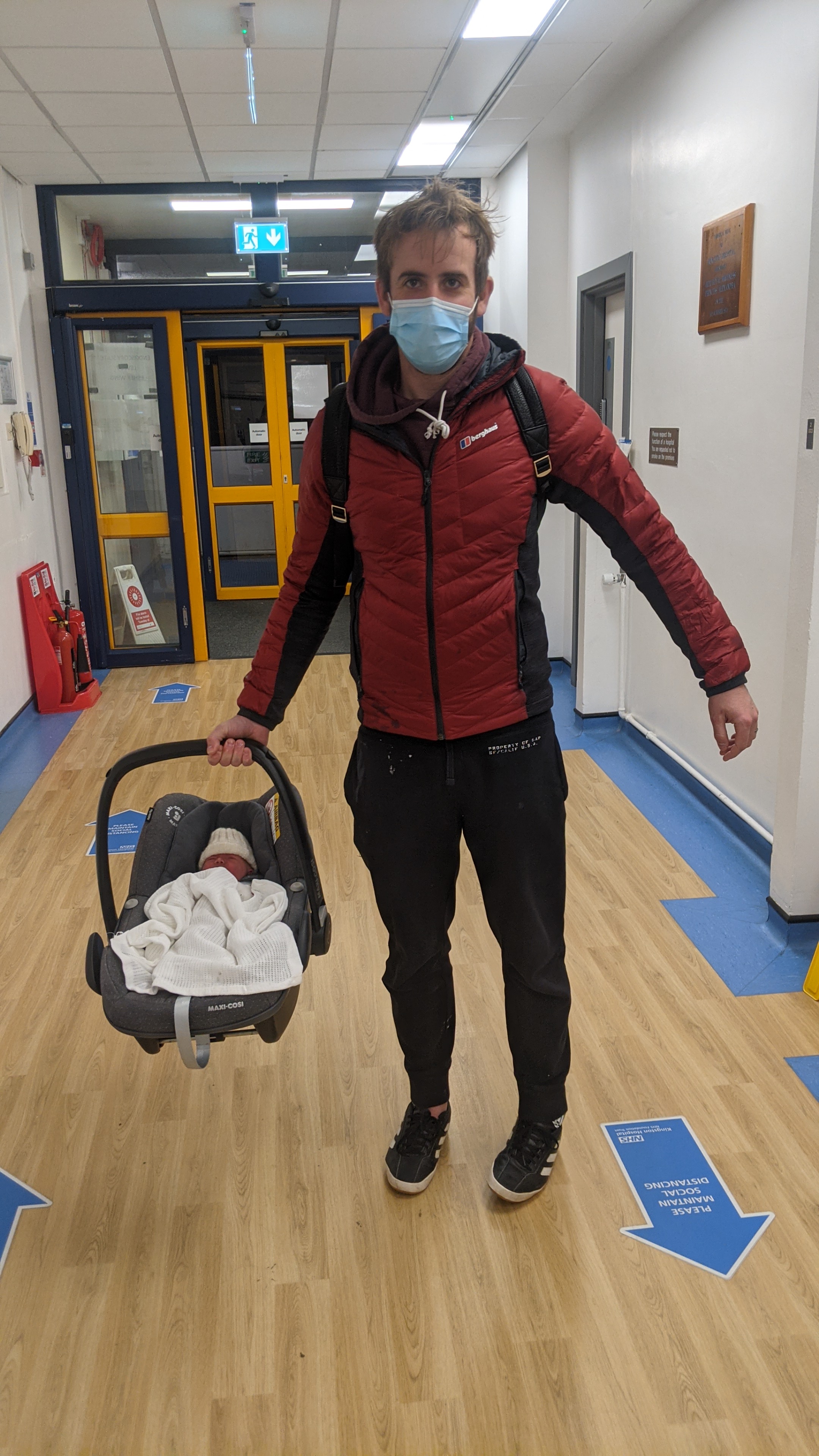 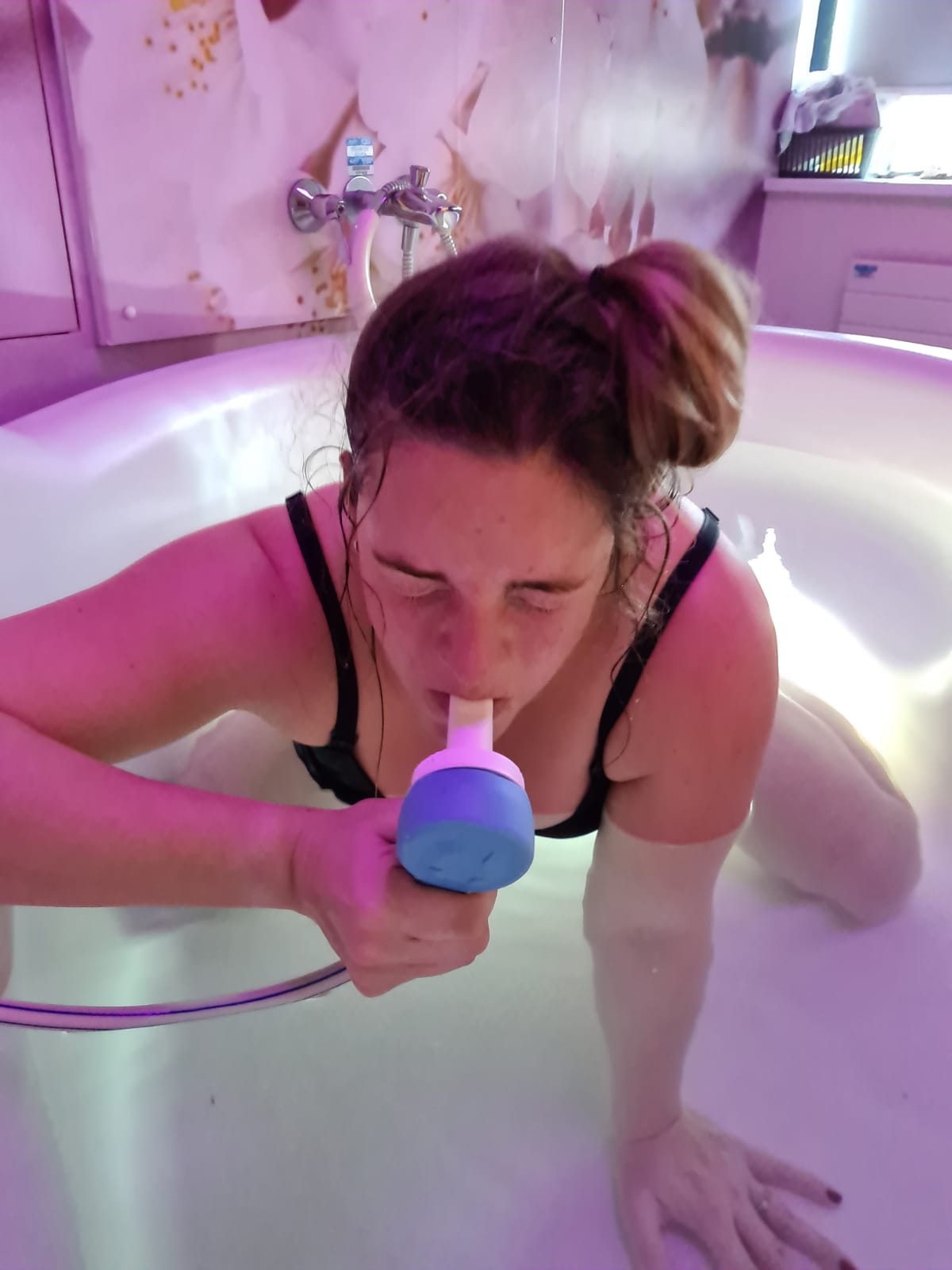